A conventional abacus uses sliding beads on sets of wires in order to annotate numbers and perform calculations.

In the accidental abacus we use this approach to create a hypothetical abacus in which the beads are the scale degrees and movement is restricted to flattening or sharpening that scale degree by moving it left or right once respectively.

Ionian mode of the major scale.

The above is the abacus in its natural state; there are no flat or sharp’s and every scale degree is in a natural position.  This therefore represents the ionian state of the major mode.  If we now wished to represent a different mode within our abacus, then we would have to shift the scale degrees to accommodate the accidental spelling of our new mode.

In this case, we could go from C ionian to C myxolydian by doing nothing more than flattening the seven.  However, to stay diatonic, we must actually be in the key of G and then flat the seven to be in G myxolydian.  The next smallest movement in the major scale would correspond to sharpening the four which transitions us from the ionian to the lydian mode:

As before, we can go from C ionian to C lydian with nothing more than a shappening of the fourth but to stay diatonic we must first move to the key of F and then sharp the fourth.

In order to further familiarize ourselves with the accidental abacus as well as lend weight to the idea of an accidental jump, let us examine a mode that requires two accidental operations:

In this case, we see that we have had to flatten the third and seventh scale degree in order to go from the ionian mode to the dorian mode.  If we interpret the above as accidental jumps, then we have two flat jumps required to go from the all-natural spelling of the ionian mode to the two accidental spelling of the dorian mode.  Two flat jumps would correspond to two perfect fifth jumps within our model.  Since each perfect fifth jump is comprised of 7 half-steps, then two jumps would span 14 half-steps.  But due to octave equivalence, taking 12 half-steps returns us to the start and thus we had actually only netted a total of 2 half-steps form our starting position.  If we take C ionian as our default and wished to go to dorian and remain diatonic, then 2 half-steps would take you to the key of D at which point you would flat the third and seventh degree giving you D dorian. 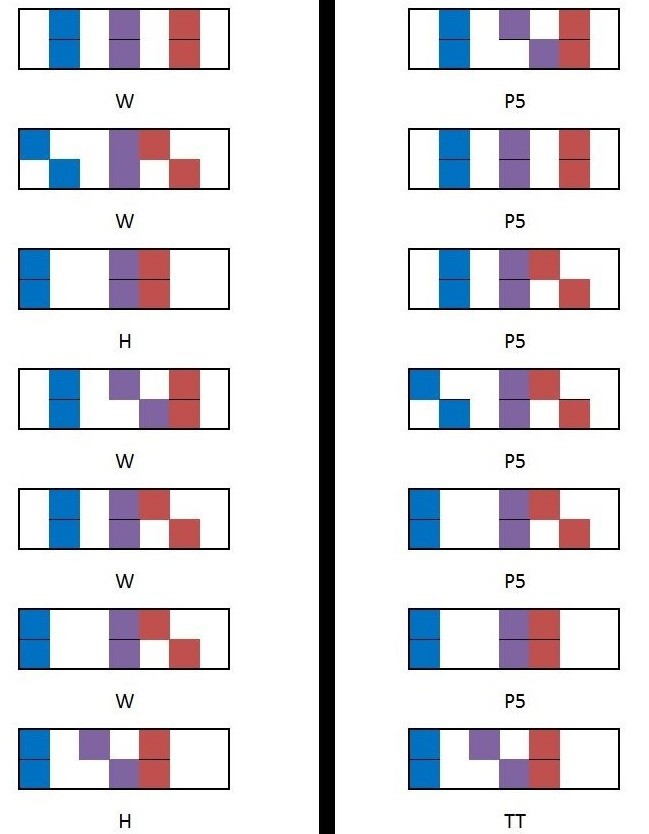 On the left, we clearly see the pattern that when two scale degrees are flattened (such as going from Ionian to dorian and the dorian to phrygian), we obtain a whole step but when five degrees are sharpened (such as going from phrygian to lydian and locrian to ionian), we obtain a half-step.  This is again consistent considering that the sharpening of five scale degrees corresponds to five sharp accidental jobs.  Each sharp accidental jump is a perfect fourth jump which consists of five half-steps.  Thus five sharp jumps correspond to 25 half steps or 1 half-step due when octave equivalence is applied.  This then accounts for the “whole whole half whole whole whole half” spelling of the major scale.

On the right, we see the exact same modes for the exact same scale but now arranged in terms of a singular flat jumps and one sharp jump, the tritone.  Thus we see that starting with the lydian and ending with locrian, we have a chain of singular jumps which connect all the modes of the major scale.  The final jump connecting locrian back to lydian is a tritone.  But it is still acceptable say that there are only perfect fifth jumps within this model considering that six simultaneous fifth jumps would equal forty-two half-steps or six half-steps, a tritone, after octave equivalence.

The purpose of this essay is merely to introduce the accidental abacus and its usage.  We leave our further discussion on its application and discussions of the patterns within it for future essays as well as the commentary below.